What are They? What Causes Them? And How Do I Prevent Them?

Everyone knows that a single lightning strike or large surge event can cause immediate destruction of electronics and their circuit boards. Some transients may not be large enough to destroy an electronic device or individual circuit board, but the effects of this surge energy overtime will cause lockups, glitches and premature failure in the future.  The Institute of Electrical and Electronic Engineers (IEEE) explains it like this: “For example, a single larger surge or several repetitive exposures to lower magnitude surges often cause a gradual performance deterioration, which may finally be associated with intermittent equipment operation as opposed to immediate catastrophic failure of the semiconductor device. In such cases where the semiconductor itself has had its performance marginalized, it is often difficult to differentiate between software-and hardware-induced errors.”

Even if lightning and power company surges did not exist, overtime circuit boards and power supplies will prematurely fail due to an accumulative effect of transients generated internal to the facility.  This is the reason IEEE recommends surge protection (for large impulses such as lightning) and high frequency filtering (to prevent gradual degradation to circuit boards and electronic loads due to transient surges generated within the home/facility). 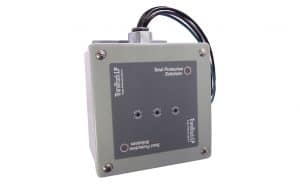 A Transient Protection Design panel mount surge suppressor installed on the breaker panels is the most cost-effective way to protect pricey electronics and appliances from immediate damage as well as from degrading transients that cause them to glitch and significantly shorten their life span.

Link Your House can provide a great solution and help protect your investment long term Contact us HERE for more information.