Sonos has launched its first in-house music streaming offering: Sonos Radio, a digital streaming radio service that includes both existing radio stations from TuneIn and iHeartRadio, as well as its own original programming through three new products including two ad-free offerings and one ad-supported option. 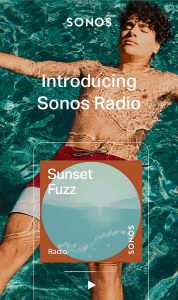 The original streaming options from Sonos  include Sonos Sound System; an ad-free single station hosted by Sonos itself, that will play “new and well-known” music, along with snippets of stories from artists about their music, as well as hours guest-hosted by select artists themselves. Sonos says this is all about mixing crowd-pleasers with the occasional song you might’ve missed, in a bid to create a single stream that will have broad appeal.

Link Your House has been a proud supporter of Sonos since coming to the AV market over 10 years ago.